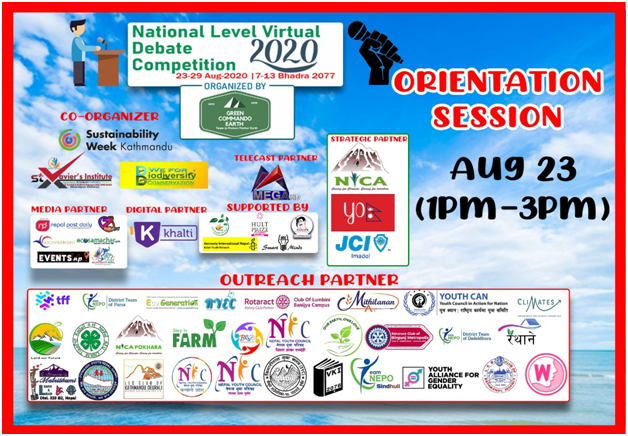 August -23-2020, 1:00 P.M Green Commando Earth held an orientation session for National Level Virtual Debate Competition on the Zoom platform, and the session was live via the official pages.

The opening remarks were given by Ashish Lamichhane, the program head and.

They were followed by, Samip Raj Paudeldiscuss briefly on the modality of the program. Mr. Ashish and Mr. Pranav ended the program with their official remarks.

Mr. Samip explained during the first phase of the program, and online forms were opened for those interested in participating in the debating competition from Aug-8-2020 to Aug-18-2020. Both Nepali and English languages ​​were given priority for the participants.

Based on the evidence submitted by the speaker, perception of the title, consistency, reputation, and time management, the debating competition group evaluated and selected people from each of the eight cohorts will be forwarded.

We will then have two semifinals on 25th& 27th of August,

And the Finale will be held on 29th August on the online Zoom Platform and will be live via MEGHA TV.

Then, the session was handed to the trainer for the day Mr. Pranav Kafle, an avid public speaker and entrepreneur.

Mr. Pranav Kafleled, the second segment of the training session, talking with the participation. He gave his idea tips and tricks to the participants. He discussed Claim, Reasoning, Evidence, Impact(CREI ), and rebuttal techniques.

He fascinated the whole audience and made an entire training session fruitful with every participant’s logic and involvement, giving answers to every query raised.

The event’s closing remark was made by Mr.Ashish Lamichhane Project Head of (Green Commando Earth) with the best wishes to the top 16.